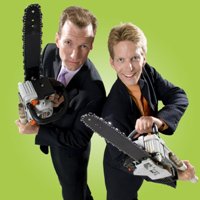 The Passing Zone (Jon Wee and Owen Morse) is unlike any other speaker.  First of all, they are two speakers.  Second, they deliver a presentation that is unique and absolutely unforgettable.  Whether it’s an energizing opening keynote to kick off your meeting, a closing general session to send everyone home laughing and motivated, or anything in between, these are your go-to guys.  Their comedy is hilarious, and their stunts are thrilling.  They’ve been featured on The Tonight Show, The Today Show, Live with Regis and Kelly, The Jerry Lewis MDA Telethon, Steve Harvey’s Big Time, and they were finalists on America’s Got Talent.  An invitation to London to perform for Prince Charles, appearances in motion pictures like The Addams Family and The Aristocrats, Four Guinness World Records, and the Montreal (Just For Laughs) Comedy Festival, put these guys in a class by themselves.  “Classy, jaw-dropping, and hilarious.” –Los Angeles Times

Teamwork: The Power of Partnership
Many speakers talk about teamwork.  Few actually do it.  Jon and Owen have been a team for over 17 years, and they have learned about communication, trust, cooperation, and synergy.  They depend on each other for the success of their crazy stunts; where they throw chain saws back and forth, balance on each others’ shoulders while juggling flaming torches, and more.  They even demonstrate teamwork by getting people from the audience to participate.  Imagine your CEO standing in the middle of flying sickles and blazing torches!  And they even juggle three people from the audience in their exciting piece – People-Juggling.

Your people will learn:

1.     The importance of working with their team members
2.     How to foster relationships with business partners and customers
3.     That working together is necessary, productive, and fun!
To view The Passing Zone’s complete bio and demo video, click here