One of the worldʼs most prolific creators of interactive content. He has created breakthrough entertainment experiences on every digital platform, including satellite television, game consoles, broadband Internet, interactive television and mobile networks. 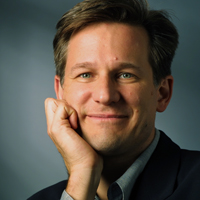 His expertise spans television, telecommunications and software. In 2009, he was named one of the “25 Executives to Watch” by Digital Media Wire. Variety has named him one of the “Digital Dozen” most influential players in new media. The Industry Standard dubbed him a “TV Anarchist”.