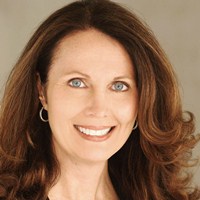 An entertainment industry veteran, Libby Gill spent fifteen years heading public relations and corporate communications as senior vice president at Universal Studios; and vice president at Sony Pictures Entertainment and Turner Broadcasting. She was also the PR/branding brain behind the launch of the Dr. Phil Show.

With a focus on getting individuals and organizations unstuck by preserving the best practices of the past and moving courageously into the future, Libby delivers keynote addresses and training programs for companies desiring to create a culture of risk-taking, innovation and bold leadership. Her proven “Clarify, Simplify & Execute” process inspires individuals and organizations to maximize their “Leadership DNA,” build high-passion/high-performance teams; and increase employee engagement.

Among her achievements, Libby is most proud of having guided many professionals to career success. Her former staff members now hold senior management positions at CBS Entertainment, ESPN, Universal, Los Angeles Philharmonic, Sony, ABC-Disney and many other organizations. Her coaching clients have also achieved great success in transitioning from one industry to another, climbing the corporate ladder and launching non-profit or entrepreneurial ventures.

As a consultant, Libby was instrumental in creating the comprehensive media launch that catapulted Dr. Phil to the highest ratings in daytime television since the Oprah Winfrey Show debuted. After starting her career as a temporary office assistant, in just five years Libby worked her way up to VP of publicity, advertising and promotion at Sony before moving on to Turner Broadcasting and Universal. Along the way, Libby also served in a creative capacity as vice president of television programming and development for Universal’s Studios USA working on syndicated talk and reality shows.

Deciding she would answer the call of entrepreneurship, Libby left the corporate world and founded Libby Gill & Company in November 2000. As she was reinventing her professional life, Libby’s personal life also underwent a major transition. She chronicled her journey of overcoming the self-perceived limitations left behind by a family legacy of alcoholism, divorce, mental illness and suicide in her bestselling book TRAVELING HOPEFULLY: How to Lose Your Family Baggage and Jumpstart Your Life (St. Martin’s Press).

Libby’s new bestseller YOU UNSTUCK: Mastering the New Rules of Risk-taking in Work and Life won a 2010 Independent Publishers Award.  Business leaders including Zappos.com CEO Tony Hsieh and Dr. Ken Blanchard have endorsed her book.  States Blanchard, “In YOU UNSTUCK, Libby Gill will help you understand the way you look at risk-taking so you can start moving past your fears and excuses toward success.  This book is a powerful tool if you know you need to change but don’t know how.  Read YOU UNSTUCK and get your life on track.”