Master Magician (close up magic as well as magic on a big stage for a large audience) Inspirational/ Motivational Speaker with an incredible story of overcoming adversity. 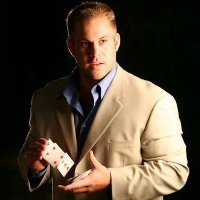 My parents were married for twenty years. My mother volunteered at my elementary school as a reading teacher, and my father was a software engineer and the president of our little league. We were the “Brady Bunch family.” All that changed on August 2, 1992. My parents got into an argument in the garage and it got out of control, and my father took the life of my mother. He was charged and, due to a plea of temporary insanity, convicted of second-degree murder, and sentenced to 13 years. I guess you can say that’s when my life began.

I was 12 years old when that happened. At 13 I moved in with a foster family while my aunt went through an intense custody battle to gain custody of my sister and I. My brother was in college at the University of Washington, and everything that I had known in life was upside down. The State of Washington made it mandatory that I see a therapist twice a week, and at first, I was hesitant and rejected the idea. Then, over time, I realized that my therapist, John Walters, wasn’t someone telling me what to do or what to think, but rather someone to help guide me to my own soul, my own heart and my own mind.

I had a huge head start in life. I knew what not to do, and at 14 years old I knew exactly what I wanted to do. I was going to be a professional ball player and professional magician. The only thing that could stop me was myself, so, I wasn’t going to allow that to happen.

After not receiving a college scholarship to play football I took the situation into my own hands. I felt I was good enough, but apparently the “system” thought otherwise. So I took the film of two other teammates and combined it as one and sent it to colleges taking credit as if it were I. One of them was a 6’6” Long Snapper that had a scholarship to Cal Berkeley. I was 5’11’’ and not a Snapper. Sure enough I got a call from University of Texas at El Paso and they offered me a “full ride” to be their Long Snapper. I quickly figured out how to snap and snapped in every game during my stay at UTEP.

Following my senior season at UTEP and the 2003 NFL draft I signed with the Buffalo Bills as an undrafted free agent, and on September 7, 2003, I played in my first NFL game against the New England Patriots. I was released by Buffalo at the end of training camp prior to the 2005 season. Then with 9 games left in the 05’ season, I was signed by head coach Jeff Fisher and the Tennessee Titans. Then released after the season. I wasn’t invited to any training camps going into the 06’ season, but sure enough, the Titans brought me back. I resigned with them on Friday, October 13th, played against the Redskins on the 15th and was fired the following week.

November 29, 2006, Coach Andy Reid and the Philadelphia Eagles offered me a job and the rest is history. If I continue to meet expectations, I’m under contract through the 2012 season, was awarded the Ed Block Courage Award in 2008 and was recently picked to play in the 2010 Pro-Bowl. All of which are an honor.

After the murder of my mother, my father going to prison, living with a foster family, being adopted by my aunt, finagling a college scholarship, making it as an undrafted free-agent in the NFL (not to mention playing with a double hernia), being fired by multiple teams multiple times, and undergoing a few surgeries, I’ve learned there is nothing in life that can hold you back. Let us be thankful, let us appreciate the differences in others and let us forgive those that are narrow minded and ignorant, for one day they’ll come around. Life will kick you when you’re down, life will strike at the most unexpected time, but may we always get back up, dust ourselves off, and do it all over again… -Jon Dorenbos.

Celebrity Testimonials on Jon Dorenbos as an entertainer and magician:

“This guy’s not just okay; we’re talking about awesome right here! He had me entertained for hours.” – Garth Brooks, Famous Country Singer

“Unbelievable. I have never seen anything like this!” – Dan Marino, Legendary QB of the Miami Dolphins

“He did go-all-the-way!  Why are you wasting your time playing ball, you were born to perform!  You are a true talent.  Thank you for an unbelievable experience!” – Chris Berman, ESPN Personality

“I told Jon, anytime I have an event, feel free, you have an open invitation. People gravitate towards him, it starts with 2 or 3 people, then 10, then 20. Next thing you know, nobody is listening to the band and everyone is surrounding Jon. His life experiences and determination separate him from the rest, and he is able to share that with everyone on stage.” – Jim Kelly, NFL Hall of Fame Quarterback

Jon performs unbelievable close-up magic AND magic for big crowds.  He speaks to any size crowd and wows them all!