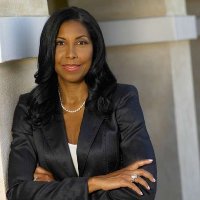 Cookie serves as Secretary of the Board of Directors for the Magic Johnson Foundation.  She addresses the health, social and educational needs of those residing in underserved communities and is involved in the development of the Foundation’s overall goals, objectives and programs.

A businesswoman at heart, Cookie recently launched her premium denim line, Cj by Cookie Johnson. Finally, a dream comes true for this jean fanatic who couldn’t find jeans to fit her body type. Realizing her testimony was that of many women, she created a versatile fit for women with real bodies. This was the beginning of a new revolution in the denim industry; Cj is currently sold at Nordstrom, SAKS Fifth Avenue and Neiman Marcus.

Cookie is the first spokeswoman for the I Stand with Magic campaign, joining her husband Earvin “Magic” Johnson, the Magic Johnson Foundation and Abbott in their continued fight to end Black HIV/AIDS. She is instrumental in the five-year effort to help reduce new HIV infections in the African-American community by educating minority women about the disease and providing helpful tools for prevention and testing. Cookie previously served as the spokesperson for the National Medical Association Immunization Public Service Announcement. She educated parents and caregivers from all communities on the importance of immunizing children in urban areas against the ten vaccine preventable diseases. Cookie was also instrumental in establishing the BREATHE Program, a national asthma awareness initiative that works to educate children and parents about the impact of asthma in urban environments.

As an honorary chairperson for the Children’s Defense Fund, Cookie helped raise awareness of children who struggle to overcome tremendous obstacles in life.  She is also chairman of Prototypes, a program that provides education and care for women and children affected by HIV/AIDS.

Cookie is also involved in the Successful Young Women’s Program at her church, the West Angeles Church of God in Christ, where she teaches a class directed to bettering the lives of young teenage women.  She is also involved with “Have I Got a Story to Tell” as a member of All Trees Productions that includes entertainers who donate their time to tell inspirational stories through word or song.

Cookie was honored by the Mother Hale Foundation in 2005 and was the recipient of the 36th Mother Hale Award. In 2006, she received the Community Service Award from the Hollywood NAACP. In 2007, Cookie was awarded the Lullaby Ball Award from the Maternal Fetal Care International for her goodwill and was also honored with a Humanitarian Award from the Behind the Bench Association.

Cookie graduated from Michigan State University with a bachelor’s degree in retailing of clothing and textiles, working in the industry for seven years. Cookie is married to Earvin Johnson Jr. and is a full-time mother to their children Andre, Earvin Johnson III (EJ) and Elisa. She is extremely active in her children’s school programs and fundraising events.