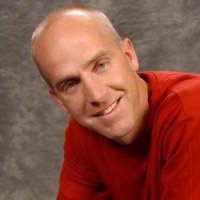 “One of the 10 most inspirational speakers in the world.” – The Wall Street Journal

On April 3, 2001 Chad Hymas’ life changed instantaneously when a falling one ton bale of hay broke his neck. He was pronounced a quadriplegic, paralyzed from the chest down with limited function of his arms and hands. However, Chad’s dreams were not paralyzed that day. Chad Hymas is a World Record wheelchair athlete and set a new world record by wheeling his chair from Salt Lake City to Las Vegas (513 miles) in July 2003.

His message inspires, motivates, and moves people to action!  His take on change, vision, leadership, safety, and life are among the most moving and inspirational that any speaker has ever conveyed.  He is amazing at customizing his speech to fit your theme or topic.  Your audience will feel a personal connection to him almost immediately.


When Chad rolls out on stage, your audience will have an immediate respect for his circumstance. His disability and what he is overcoming is a true example of, “set your mind to it and you can accomplish anything.” Through his unique sense of humor and his emotional story, your people will fly higher than they ever thought possible.

When Chad was in the hospital and learning to balance his body again, his three-year-old son told him “to use his wings” because he no longer had use of his legs. Chad delivers this message to thousands, and will convince your group to “stretch out their wings, take off with confidence, and not worry about where they’re going to land!”

Chad prepares for each event separately and incorporates his story and life experiences with the specific needs of the target audience. He will know the theme of your meeting and relate his circumstances to it. Chad enjoys studying the audience prior to speaking so that he can align his message with the personalities in your group.

The impression Chad leaves with those who hear him is genuine. They will have a knowledge of achieving what some say is unachievable! His words are heartfelt, sincere, and honest. Let Chad’s story impact your group to “fly high!”

For more on Chad, including complete bio, demo video, and testimonials, click here.