Host of Enormous Hit TV Show "Man vs. Wild" on Discovery Channel, and the new "Get Out Alive" on NBC. Everest Mountaineer, Former Member of the British Special Forces, Bestselling Author 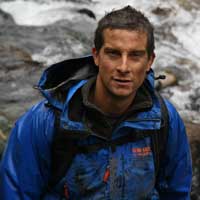 Bear is a man who has always loved adventure. After breaking his back in three places in a parachuting accident, he fought his way to recovery, and two years later entered the Guinness Book of Records as the youngest Briton to climb Mount Everest, aged only 23. He has since led ground-breaking expeditions across the world.

But for Bear, it is not just about pushing his limits. It’s about overcoming challenges, and living your dreams. This belief, and Bear’s gift for communication, have led him to become a world class motivational speaker, author and TV host.

Bear’s passion and enthusiasm for the outdoors are now shared and enjoyed through his TV programmes in over 150 different countries, reaching over one billion people worldwide.

Get Out Alive
Bear Grylls has climbed Mount Everest, endured dozens of bone-crushing injuries, explored the world’s most unforgiving and desolate locations, confronted dangerous creatures and gone to extremes to survive in the wild (frozen yak eyeballs, anyone?). Now, the world’s most famous survivalist is off on another treacherous adventure, and this time… he’s taking 20 ordinary Americans along for the ride. Welcome to “Get Out Alive with Bear Grylls.”
In this ultimate test of strength and endurance, both inner and physical, 10 teams of two (made up of friends or family members) will be stranded for 25 days in the remote landscapes of New Zealand. Their mission? Survive the wild, journey as a group and avoid elimination.
Teams will rise and fall on each journey, and allegiances will be tried and tested. At the end of each episode, Bear will send home the team that he believes is the least likely to “Get Out Alive.” And in the end, one team will emerge from the wild to claim victory. Do you have what it takes to go the distance? Powerful, emotional, breathtaking and epic, it’s the Bear Grylls adventure competition that gives “extreme” a whole new meaning. One-hour alternative series.