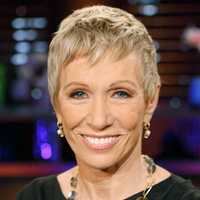 Barbara Corcoran’s credentials include straight D’s in high school and college and twenty jobs by the time she turned twenty-three. It was her next job that would make her one of the most successful entrepreneurs in the country when she took a $1000 loan to start The Corcoran Group. She parlayed the loan into a five-billion-dollar real estate business and sold it in 2001 for $66 million.

Barbara is the real estate contributor for NBC’s TODAY Show where she comments weekly on trends in the real estate market. She’s also a Star on ABC’s reality hit Shark Tank. In the first and second season, Barbara invested in thirteen young businesses that she’s shepherding to success. In Seasons 3 and 4, she has invested in 18 entrepreneurs!

Barbara is the author of If You Don’t Have Big Breasts, Put Ribbons on Your Pigtails, an entertaining business book that has become a national best-seller. Her latest book, Shark Tales hit the #1 business book on Amazon.

As a speaker, Barbara brings her front-line experience and infectious energy to every group she addresses. Motivational, inspirational, and sometimes outrageous, Barbara Corcoran’s tell-it-like-it-is attitude is a refreshing approach to success.

How do you turn a $1,000 loan into a five-billion dollar business? According to self-made real estate empress and TV personality Barbara Corcoran, you do it by learning how to fail well. Barbara tells the story of how, armed with a $1000 loan and her own gritty determination, she quit her job as a waitress to start a tiny real estate company in New York City and turned that company into a multi-billion dollar business. Barbara describes what it’s like to go from a tiny start up to New York City’s largest real estate company to a major TV personality as the real estate contributor to the NBC TODAY Show and a shark on ABC’s Shark Tank, and how she overcame the many obstacles along the way.  A highly motivational and hugely entertaining success story.
How To Lead Your Team To Greatness
Barbara Corcoran, who led 1,000 + brokers at The Corcoran Group, New York’s largest real estate company, is an expert in the art of leading a team to success. She knows exactly what it takes to create a thriving workplace and how to develop a winning team from a diverse group of employees from Gen Y to Gen X to Baby Boomers.  From hiring the right people and firing the wrong people to bringing fun into the workplace and establishing an atmosphere that breeds innovation, Barbara shares her unique and winning strategies in how to get people moving on the path to professional and personal greatness.
How to Build a Business – Using Innovation, Branding, Leadership & Guts
Innovation may be the single most important key to success in today’s highly competitive marketplace. Barbara Corcoran is known for having built the most successful real estate business in New York City, and now she reveals the unconventional strategies she used to do it: how to create an image bigger than the reality; how to use the press to get free publicity; and how a little savvy and a lot of guts can turn you into the leader in your field. Barbara shares her innovative ideas, insights and anecdotes on building a thriving business and a successful brand in today’s marketplace.