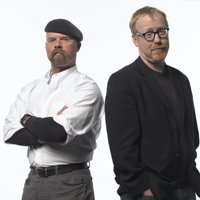 It’s a tough job separating truth from urban legend, but the MythBusters are here to serve. Each week on the Discovery Channel, special-effects experts Adam Savage and Jamie Hyneman take on three myths and use modern-day science to show you what’s real and what’s fiction.

Savage and Hyneman do more than explain how something may or may not be scientifically possible. Through trial and error, they actually demonstrate it.

Adam Savage’s fascination with creating things started when he began building his own toys at age 5, and he hasn’t stopped since. He’s served as an animator, graphic designer, stage and interior designer, carpenter, welder and scenic painter, and he’s worked in everything from metal to glass, plastics to injection molding, and pneumatics to animatronics. For the past eight years, Adam has concentrated on the special-effects industry, honing his skills through more than 100 television commercials and 12 feature films, including Star Wars Episode I: The Phantom Menace and Episode II: Attack of the Clones, Galaxy Quest, Terminator 3, A.I. and the Matrix sequels. He’s also designed props and sets for Coca-Cola, Hershey’s, Lexus and a host of New York and San Francisco theater companies.

And now, in addition to co-hosting Discovery Channel’s MythBusters, Adam Savage also teaches advanced model making, most recently in the industrial design department at the San Francisco Academy of Art. And somehow, he also finds time to devote to his own art – his sculptures have been showcased in over 40 shows in San Francisco, New York and Charleston, W.V.

Hailing from Indiana farm country, Jamie Hyneman, like his co-host, is also a multifaceted man: he’s a wilderness survival expert, a boat captain, a diver, a linguist, an animal wrangler, a machinist and a chef, to name a few. Hyneman’s career has been equally diverse: he earned a degree in Russian languages and literature and ran a sailing/diving charter business in the Caribbean for several years before he moved over to the visual-effects industry.