Rodney Mullen: The Life and Career of an Icon

Aug 5, 2021In: CAL's Exclusive Speaker Articles, Speakers in the News

For many riders, historians and athletes, Rodney Mullen is the most influential street skater in the sport’s history.

The Floridian invented several skateboarding tricks, including the heelflip, the ollie kickflip, the 360 flip, the flat ground ollie, and the impossible.

The “godfather of modern street skateboarding” won his first world title at the age of 14. From then on, Mullen won 34 out of 35 freestyle events he entered.

“I defended my world title over 35 times, and I recall being genuinely happy about it only twice. The rest were hollow victories tainted by playing it safe,” admitted Mulled in 1999.

“The media told the world of my greatness, while I felt like a fraud. I was cowardice wearing a crown.”

Progressively, he shifted his interest from freestyle to street skating. As time went by, Mullen became more than just a prolific skateboarder.

He created his own brands and companies, developed his inventive talent, and became a popular public speaker. 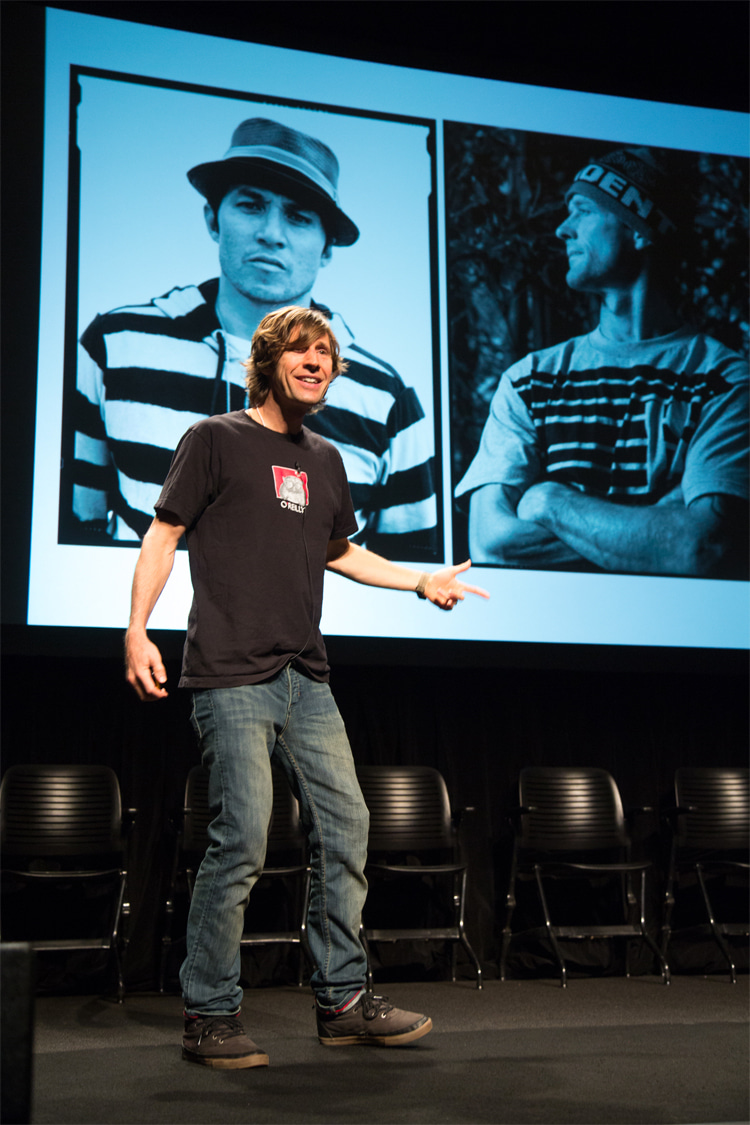 John Rodney Mullen was born on August 17, 1966, in Gainesville, Florida.

Rodney started skateboarding on January 1, 1977, after being introduced to it by a neighborhood friend.

However, his father didn’t want his son to be riding a skateboard – he thought it was too dangerous.

Rodney promised him that he would stop skating if he suffered any serious injury.

Luckily, on New Year’s Day, Mullen’s father was in a good mood, and the local skate shop was open, so he got what he dreamed of – a black Banzai aluminum board with precision wheels and ACS trucks.

“My father always said skateboarding would ruin my life. Instead, it gave me freedom,” Mullen later revealed.

Despite sleeping with orthopedic footwear to correct a severe pigeon-toe condition – femoral anteversion – the young Floridian became obsessed with skateboarding and was always practicing.

His first sponsor was The Inland Surf Shop.

One year after he got his first skateboard, Rodney finished fifth in the boy’s freestyle division at the 1978 USA Open Skateboarding Championship held at Kona Skatepark in Jacksonville, Florida.

Bruce Walker, a skateboard manufacturer who had coached Mullen’s idol Jim McCall and even Kelly Slater, immediately spotted a potential talent and sponsored him for two years. 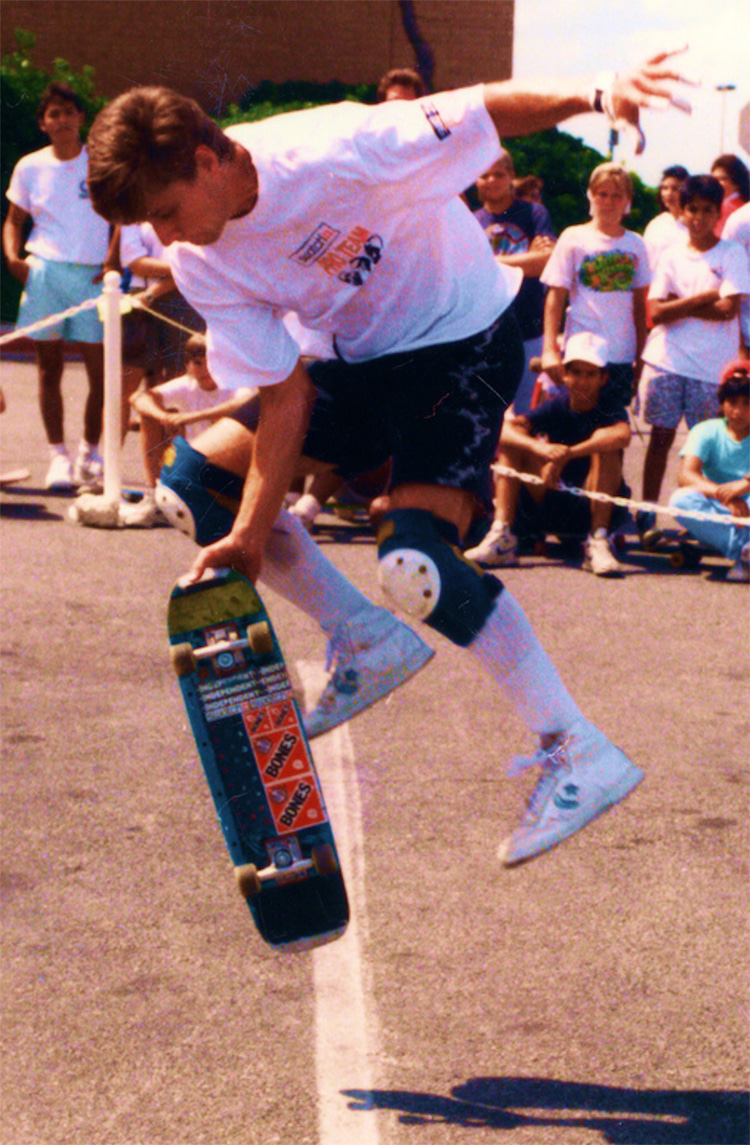 Golf? No, Thank You

After a while, Rodney’s family moved to a farm in Florida, and the teenager spent most of the time improving his flat ground skating skills in the garage.

Although he was quite isolated and had not many riding areas available, Rodney says the period from July 1979 through August 1980 was his most creative time.

His father realized his son’s talent and challenged him to master another sport – golf. “No way,” said the youngster.

Mullen was obsessed with competition preparation and self-assessment.

“Every motion would be taken apart and cycled over my mind, from foot plant and weight distribution to where I held my shoulders and eyes,” the skater later revealed.

He had become a freestyle expert and collected 34 amateur competitive trophies before winning the national title at Oceanside in 1979.

And he also met someone who would become a longtime friend – Tony Hawk.

“After this success, my father was motivated to keep me involved in skateboarding,” recalled Rodney.

Throughout the 1980s, the Floridian became an unbeatable powerhouse who blended freestyle with vert skating tricks and maneuvers.

He even wrote articles and tutorials for Thrasher magazine on how to perform the most complex freestyle tricks.

Rodney Mullen nearly completed a chemical engineering degree at the University of Florida. In 1988, he left during his senior year to invest in and run World Industries alongside Steve Rocco.

“Rocco had an intuitive perspective on the skating industries that the old guards didn’t. His ear was to the ground,” Mullen underlined. 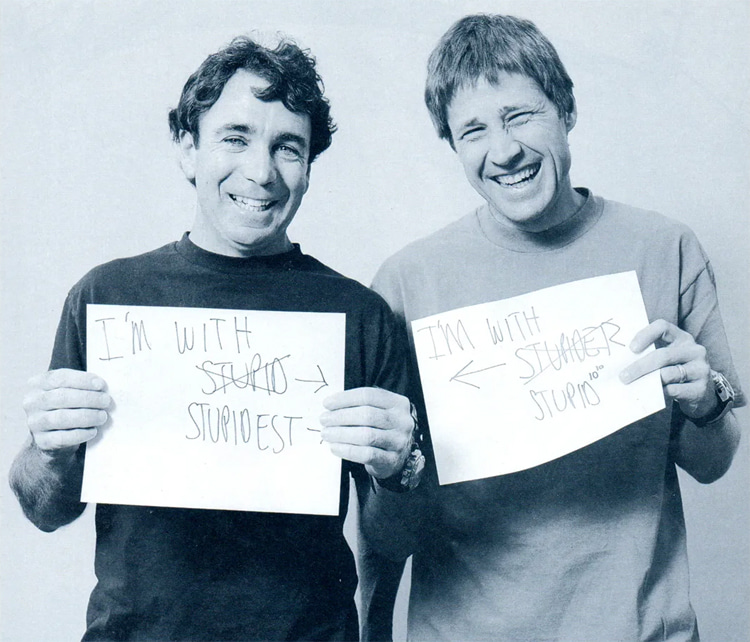 Alan Gelfand invented the ollie on vertical sections of the Skateboard USA skatepark.

After watching Gelfand performing it on the wall, Rodney immediately started thinking about how he could get the board off the flat ground using the ollie technique.

“I realized that it’s just the same motion I’ve been doing for years – it’s a see-saw motion. That’s how ollies work. It’s just a punch and a little hop,” Mullen once said.

“The real key to it was dragging your foot and leveling it out, which brings the board up. It took me ten minutes, fifteen, half an hour, an hour.”

“And the next thing you know, you’re getting them this high, and that’s what laid the foundation for everything else.”

The truth is that the flat ground ollie changed street skateboarding forever and paved the way for hundreds of new tricks and variations.

“Originality is most important to me,” Mullen stressed. 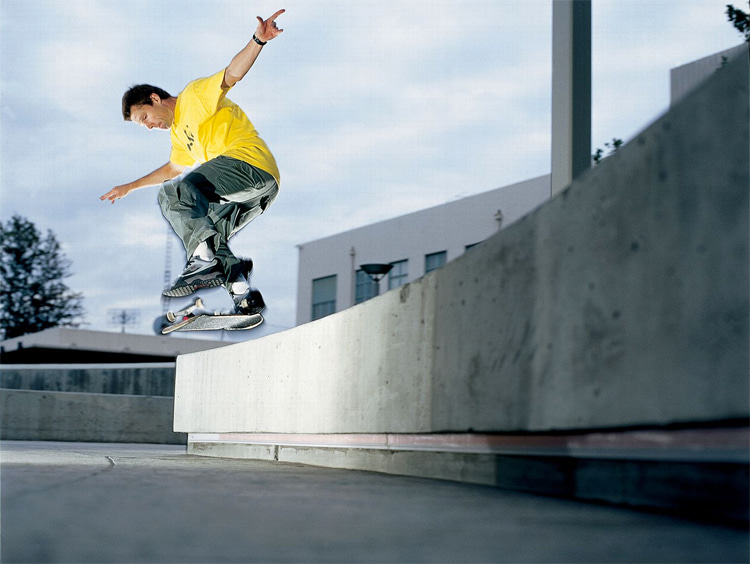 Despite his reluctance to shift from freestyle to an ever-growing street skateboarding movement, Mullen’s perspective changed when he joined Plan B Skateboards in 1991.

In the video “Questionable,” the Floridian makes the official and formal transition from one discipline to another by mixing flip tricks with boardslides and grinds over obstacles.

He also unveils two new tricks – the Casper slide and the kickflip underflip.

Another popular Plan B video followed – “Virtual Reality” – and Rodney Mullen made sure he unleashed all his talent and creativity, introducing a new move: the darkslide.

However, the sudden death of Mike Ternasky, founder of Plan B and a victim of a car crash, put an end to an era.

However, the idea never quite materialized the way it was initially planned, and the firm closed its doors in 2000.

Skateboarding had become a global physical and cultural outdoor activity with a well-established DNA.

“Skaters had their own look, own clothes, own way of looking at the world,” Mullen said of the 1990s.

This period marks the release of the timeless “Rodney Mullen vs. Daewon Song” video series – Round 1, Round 2, and Round 3.

Rodney Mullen returned to his roots as a rider for Enjoi Skateboards and began experimenting with new truck designs.

Mullen’s revolutionary trucks evolved into the US patent number 6,443,471B1, and Tensor Trucks was founded. The design included a polymer baseplate slider, interlocking bushings, and a splined kingpin.

The Floridian skater-inventor was back in the business world and, alongside Daewon Song, created Almost Skateboards.

Mullen found himself in a comfortable financial position and started working for Globe via Dwindle Distribution, a skateboard distributor he and Rocco had established.

The 21st century opened new doors to the innovative skater-entrepreneur.

Mullen was one of the stars of Tony Hawk’s Pro Skater video game series, and his popularity soared.

But the Floridian kept true to his original dreams and values and continued adding new layers of technology (Impact Support, Double Impact, and Uber Light) and knowledge to skateboarding.

By the end of the 2000s, Mullen had already achieved legendary status as a skateboarder and action sports businessman.

In 2007, skateboarding’s Yoda started the process of resetting his stance by relearning and training tricks with a goofy stance.

Rodney believed a neutral stance – or absence of a natural stance – would help him overcome a series of injuries he suffered over the years while riding regular-foot. 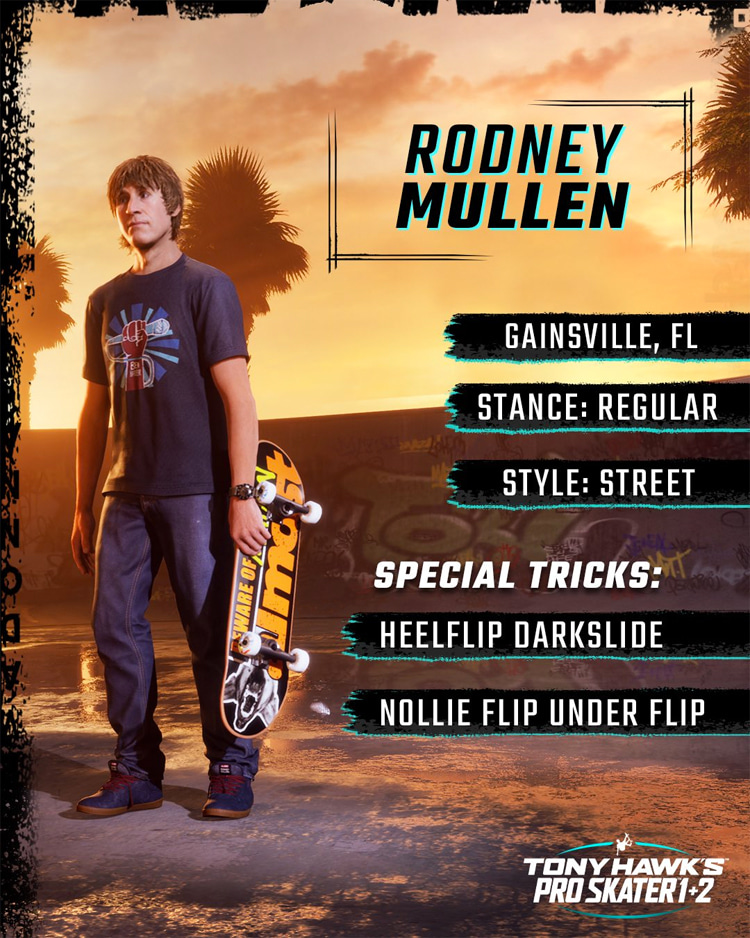 The 2010s saw a more private Mullen keeping his skating sessions for himself.

He only appeared publicly in 2014 for Tony Hawk’s RIDE YouTube channel and in a 2015 Almost photo retrospective.

In 2012, Mullen also gave a TED Talk at the University of Southern California (USC) titled “How Context Shapes Content.”

The godfather of street skateboarding shared his love for the sport and explained how he brought innovation into tricks and maneuvers.

But that was probably just the start of many inspirational conferences, workshops, and public speaking masterclasses Mullen participated in.

Mullen became more than just one of the greatest skateboarders of all time – he turned his past experiences into deep philosophical questions and reflections.

“Skateboarding is as much, or more, an art of mode of expression than it is a sport,” Mullen told the audience at the Lemelson Foundation.

“What skateboarding has given me is precisely that – a form of expression that drew me to it, and, in so doing, I was able to express and be who I wanted to be through it, in a sense.”

On his path to personal enlightenment, Rodney Mullen even stated that skateboarding should not be categorized as a sport – it’s an art form.

Actually, he believes the skateboard should be seen as an extension of the rider’s body.

“I kick my board around sometimes and watch its motions as it twirls around,” explained Mullen.

“I get an idea of what I want to do, then I think over it a lot, like where my feet have to be to press the board back. I think about the mechanics of it after the fact.”

Skating at night – when and where nobody can see him – became a preference. “I follow my feelings.”

And he also broadened his interests. Mathematics, physics, engineering, and music (heavy metal and classical music) became part of his life.

Ben Harper gave Rodney the Grammy he won in 2004 for “Best Gospel Album.”

Since 1987, Mullen participated in over 40 movies, videos, and documentaries as a professional skateboarder, narrator, actor, or stunt skater.

Rodney Mullen was inducted into the Skateboarding Hall of Fame in 2013. One of his skateboards is on display at the Smithsonian.

The philosopher of skateboarding, the thinker, and visionary dug deep into the essence of his passion and put into words what no one else has ever written or considered.

“Skaters have that kind of sensory connectedness with the ground through the nuances of force and feel,” he reflected.

“As though motion combines with the punctuated rhythms of tricks all harmonize into an unthinking somatic awareness – chords of knowing.” 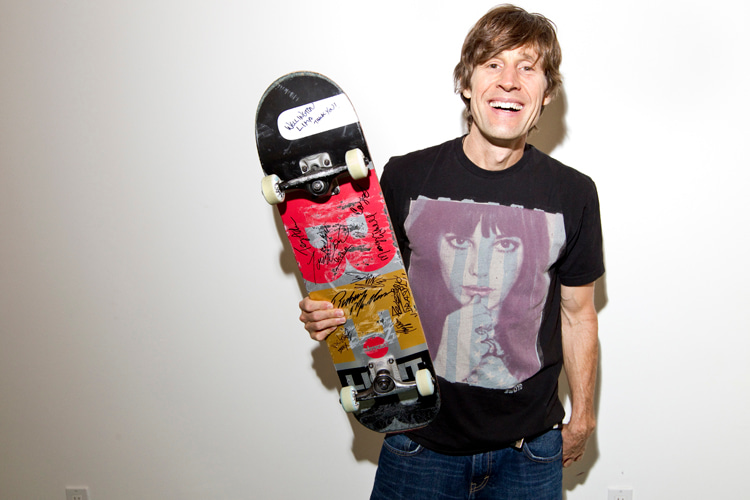 Rodney started dating Lori Guidroz after the dissolution of his first marriage. He has no children.

Rodney Mullen has an estimated net worth of $30-40 million.

He co-authored his autobiography, “The Mutt: How to Skateboard and Not Kill Yourself.”

“Skateboarding has been my battlefield, my personal proving grounds – spectators or not. It has been the arena where I could stake my claim, the play where I would contribute my verse, and even the pen with which I write,” expressed street skater. 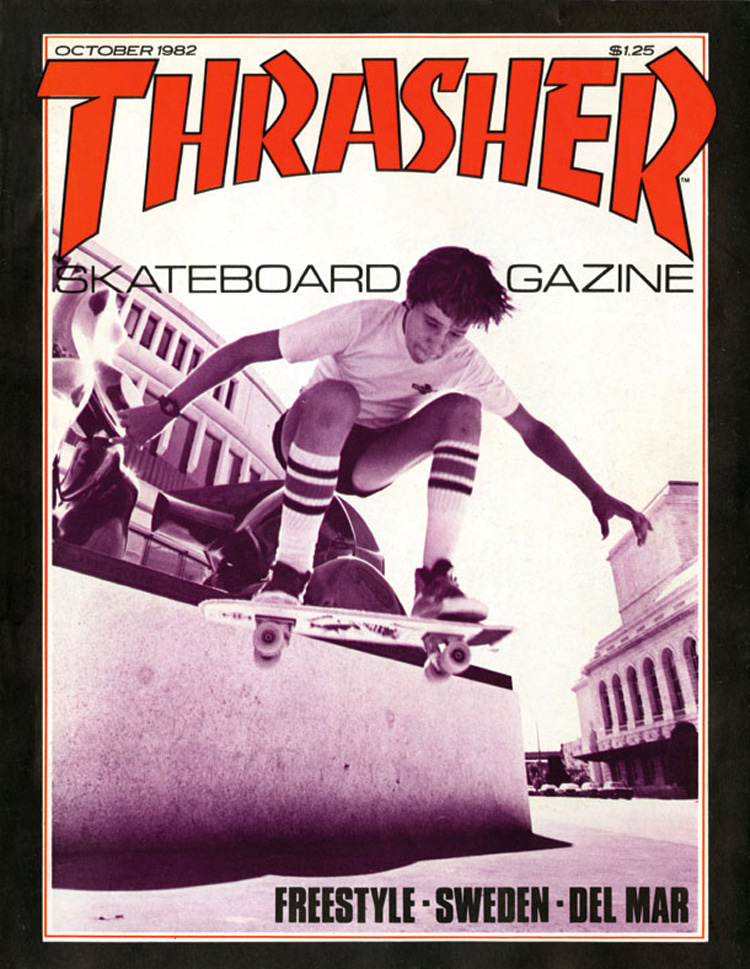 Here’s a list of tricks created by Rodney Mullen: