Wowing the World With Magic

By Stephanie Bertholdo for The Acorn 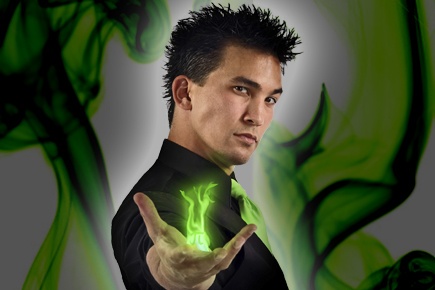 Move over David Copperfield, Criss Angel and all you other brain-teasing magicians. Jason Latimer is ready to bend some light, shape water, walk through solid objects—and blow some minds.

The 32-year-old Latimer, an Agoura High School graduate, will perform at Club Nokia in Los Angeles on Sept. 25. He plans to showcase 8 tons of his specially designed magic tricks, most of which have never been performed in California.

For Latimer, magic is all about the pursuit of wonder. He’s been perfecting his craft for 23 years, and his path of discovery started with a simple credo: “Dream first, think later.”

“It’s not about rabbits and hats anymore,” he said about his style of magic.

For Latimer, the magical pursuit of wonder is an attempt to understand how the world operates.

Magic captured Latimer’s imagination at the age of 9.

“I saw a magician and my mind exploded with ideas,” he said. “I was hooked from the moment I saw it.”

Latimer’s parents, an architect and an actress, allowed their son a lot of latitude growing up. He tinkered from an early age, and was eventually allowed to take apart and rebuild appliances in their home.

Latimer played with magic for years and last year competed in a BBC television show in England called “The Magicians.” He was the sole American competing against all-British acts. When the public voted for the winner, he was named the champion.

His blend of science and wonder have helped a him win 17 consecutive international awards, including three World Championship titles in magic. He has appeared on “The Talk,” “Ellen,” “The Late Late Show with Craig Ferguson,” and has performed around the world.

Latimer attended college when his magic career was taking off. He was the second youngest magician to win the World Championships of Magic in 2003 while a student at UC Santa Barbara.

When his gigs began to interfere with his studies, college administrators were ready to kick him out of school. But when they learned that Latimer was using engineering, math and scientific concepts in his act, they gave him the leeway he needed to develop his own college path.

He gobbled up subjects like applied physics, chemistry, engineering, science, psychology, math—even economics—as a means to shoot down the rabbit hole of discovery and understanding.

“I united as many sciences as I could so could feel better and not feel like I was standing too close to the chalkboard,” he said. Out of it, I created my own genre of magic.”

To this day, Latimer touches base with his former professors to test his magic against scientific theory and understanding.

Most people have probably seen the “ Follow the Ball” game put on by amateur and professional magicians alike. The audienc follows the cup where they think the ball is hidden. Latimer’s spin on the old trick has the audience following the ball in clear glass cups.

Other tricks include shaping water into objects and popping them, bending a beam of light with his bare hands and a new approach to levitation called “bullet time.”

In October, Latimer will speak at TEDx Wall Street, where he will talk about how and why he developed his particular style of magic. TEDx conferences bring people together to spark discussion and share ideas.

Latimer has his own ideas on why he was invited to speak.

“Most magicians say I’m going to do something and you’re going to figure it out,” Latimer said. “I think most magicians have this mentality. I feel that I had no idea that stuff would work. I’m armed with wrench and a question. That’s why I’ve been asked to speak at TEDx. It’s not about magic tricks. It’s about how close to get to an idea when it sounds completely impossible.”

Latimer sees magic in everything, including movies, art and the clouds.

“I get fooled and tricked every day. There’s so much going on in the world that blows my mind,” he said.

Latimer’s show at Club Nokia will start at 8:15 p.m. Doors will open at 7 p.m. Ticket prices range from $25 to $75. “Meet and Greet” VIP tickets include a premium balcony seat, VIP lounge access and a custom show poster.