By Nolan Bushnell for Bloomberg News.

Editor’s Note: We asked Nolan Bushnell to offer advice on how to start a global tech company.He should know. Bushnell helped create dozens of companies including Atari and Chuck E. Cheese’s restaurants. At his pioneering video-game company, he once employed Apple’s late co-founder, which is the basis for his new book “Finding the Next Steve Jobs: How to Find, Keep and Nurture Talent,” published by Simon & Schuster.

A few years ago, I was speaking in Russia, and my interpreter, a well-educated woman in her thirties, asked me what I did for a living. I told her I started companies. She looked at me blankly.

“Has the government chosen you to do this?” she asked.

“How do you get permission?” she asked. 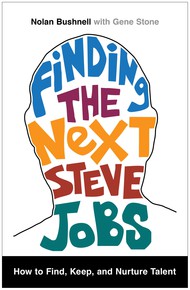 For the three days this woman was my interpreter, she could not get it through her head that someone could just wake up one day and start a company. She was sure that somehow I was in cahoots with the government.

Studies show repeatedly that entrepreneurship is more common and successful in the United States than anywhere else in the world. This isn’t because there isn’t tremendous creativity elsewhere. There is. It’s just that in many cases, political systems, as well as the cultures that created those systems, can make it very difficult to start a new company.

However, I believe that no matter where you are, if you want it enough, you can turn a great idea into a great company. Here are some tips:

Given the extraordinary growth of the Internet, remember that the world is now your potential partner. Design something on the Web, and become a virtual entrepreneur. Ask people from all over the world to work with you, or form joint ventures, or create a structure in which everyone becomes self-employed. Check out the regulations in your country, and figure out creative ways to work with them. If you create a product, can you ship it through a different country? If it’s a service, maybe you can set up your corporate structures in the Bahamas, where the rules are more lenient.

If you’re looking for something new and innovative to bring into today’s world, read science fiction to find it. I think most of the big, inventable ideas have already been written about in science fiction (and movies). Read a book, see a movie, spot an idea, and make it happen.

Maybe your country has a lot of rules stifling creativity and innovation — all the more reason to make sure that your company doesn’t. Whatever kind of company you create, make it the opposite of your regulation-bound, hierarchy-filled country. The more horizontal your company’s chain of command, the more likely you are to succeed.

Feeling alone? Find a creative community in your country. In America, Mindshare in Los Angeles is one of my favorites, a place where wonderfully creative people get together and share ideas. If there isn’t a community like this in your country, start one. Invite all the smart and creative people you know, and ask them to invite all the creative and smart people they know. Get together once a month. Feature a speaker. You’ll be the one who started the coolest community around.

Take risks. Risk isn’t a part of the culture everywhere — but it should be. It’s necessary. Without risk there’s no innovation. In Silicon Valley, most venture capitalists won’t invest in someone who hasn’t had at least one failure. If your first idea goes belly-up, your next one is less likely to. I’ve started 27 companies, and seven of them have failed. That means I’ve started 20 that have been successful. Maybe the idea was flawed. Other times the concept was before its time.

Find mentors. Mentors are important. If you can’t find one locally, go online and find one anywhere. The Internet means you can start a company in Cape Town with an adviser in Tokyo. Look into programs in your country and others that will mentor you. I recently joined the GIST Initiative, a group funded by the U.S. State Department to promote entrepreneurship in Third-World countries.

The bottom line is that conditions for entrepreneurship are improving across the globe. Anyone, anywhere, can invent the future. The Internet is letting innovators flourish in ways that weren’t possible before. Take advantage of it, and start the next Apple or Alibaba today!