Chef in a Box

By CAL Entertainment Exclusive Pablos, and Nathan Myhrvold for Ieee.org

Have you seen a vending machine lately? Most are still pretty basic: Put in some cash and out comes a can or package. But the most advanced models have computer processors and touch-screen displays that let you customize your order to a remarkable degree. Touch-screen drink machines, for example, use a set of flavor cartridges to create more than a hundred soft drink combinations, be it Raspberry Coke or Peach Sprite Zero. The Let’s ­Pizzamachine kneads the dough, spreads it with sauce, cheese, and your choice of toppings, and then bakes it under infrared lamps—all in less than 3 minutes. And ­MooBella’s Ice Creamery takes a mere 40 seconds to create a custom-blended dish of ice cream, with nearly 100 combinations of flavors and mix-ins. 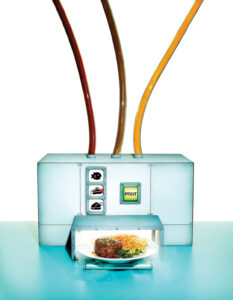 Today’s high-tech vending machines are more than just novelties. They represent the beginning of what will eventually be a revolutionary shift in the way food is prepared. In this new food future, we predict, meals will be prepared not by human hands but by a “food ­compositor”: a machine that creates healthy, delectable, and affordable dishes from a set of basic ingredients and flavors at the push of a button. Imagine sitting down to a dinner worthy of a three-star Michelin restaurant for about what you’d pay today for a McDonald’s Happy Meal. And that meal will be catered to your specific tastes and health needs, with virtually no effort at all. Once food compositors become commonplace, the technology will lead to seismic changes in food production, storage, and distribution. Although that vision is at least 10 years away, researchers today are already prototyping the technologies that will make it possible [see sidebar, ­“Adventures in Printing Food”].

Culinary innovation is nothing new, of course. But in recent decades, the pace has accelerated, thanks to advances in food science and the relentless economic and social pressures of globalization. The result is that people now have unprecedented access to new foods and are being exposed as never before to new culinary techniques and styles. At the radical edge of this global food revolution is what we call Modernist Cuisine, whose freethinking chefs experiment with ingredients, equipment, and techniques borrowed from laboratories and processed food factories to create flavorful foams, unbreakable emulsions, and unusual textures and tastes. A typical experiment is to reconstruct a common food—say, an olive—by extracting the ­essential flavors from it and then reassembling the components into a recognizable yet more intense version of the original. In our research kitchen, we recently repurposed an ultra­centrifuge, ordinarily used by cell biologists, to extract a creamy pea ­“butter” from pureed peas.

The next phase? The Postmodernist kitchen, in which raw ingredients will be deconstructed to the point where they’re no longer recognizable as food—mere “food elements.” The chef will then be able to build those food elements into something approximating a familiar dish—or something as yet unimagined. The “chef” could also be an automatic food compositor capable of producing a Postmodernist meal that’s just as delectable as one at a gourmet restaurant but more convenient, affordable, and healthy.

Still with us? No? Maybe you’re recoiling at the idea of a meal that spits out of a machine at the push of a button. But unless you grow everything and prepare everything yourself, you’re already eating plenty of push-button food. A bread machine or coffeemaker is just a simple kitchen robot. That gourmet frozen lasagna you heated up for lunch may look handmade, but it likely rolled off an automated assembly line. Even those organic heirloom tomatoes in your salad may have been picked, sorted, and packaged by machine.

Now we don’t expect you to replace your kitchen cabinets with a row of refrigerator-size vending machines. But would you consider one the size of your microwave? We believe the same miniaturization that has overtaken other industries will happen to food preparation as well. The first photo labs occupied huge buildings. In time, printing machines could fit in any pharmacy. Today, you can make your own photos from a small printer that sits on your desk or slips easily into a briefcase. A mini food factory in your kitchen is just a matter of time.

A food compositor will likely work very much like today’sinkjet printers and 3-D printers. An inkjet printer starts with a digital image that’s been divided into tiny squares called pixels and reproduces it by shooting liquid ink onto paper. High-quality printers use up to 12 shades of ink, which in combination allow millions of colors to be produced. A 3-D printer similarly takes a digital representation of an object, divides it into tiny cubes called voxels (short for volume elements), and renders it by spraying out thin layers of melted plastic, powdered ­metal, even sugar.

A food compositor would begin with a digital “recipe” in which each ingredient has been broken down into tiny ­edible elements—let’s call them “morxels.” To “print” a food, the compositor would mix and match morxels from a number of cartridges, each containing a basic building block for flavor or texture. As the food compositor prints each morxel, it could also season, dye, hydrate, and cook it with a heated element or the zap of a laser. As with prototypes created by 3-D printers, the shapes of composited dishes could be fancifully complex. And as with inkjet photos, the color of the food could span the hues of the rainbow.

To be sure, printing a meal won’t be quite as straightforward as printing a photo or an auto part. Flavor scientists have identified five basic categories of tastes: sweet, salty, sour, bitter, and umami (meatiness or savory). But you can’t simply re-create a flavor by combining essences of these taste dimensions. Rather, the early generations of food compositors will rely on a basic set of carbohydrate and protein cartridges, plus some dried and powdered flavors. That might be all you need to reproduce a wide range of Italian dishes, which draw from a relatively ­limited palette of ingredients, such as olive oil, garlic, basil, oregano, and Parmesan cheese. If you wanted to print Thai food, you’d add to your compositor flavors like chili peppers, lemongrass, fish sauce, and galangal (similar to ginger). Those with broader tastes and deeper pockets might stock a cartridge for every flavor found in a restaurant or home kitchen—but there’s probably no more than a couple of hundred flavors.

Will food compositors take the creativity out of cooking? They will certainly change it. The technology will remove much of the uncertainty from the assembly of the food. And so the creative part of cooking will move upstream—to inventing new recipes. Recipe development will take on new meaning when chefs have software-design tools for food—like, say, a “ChefCAD” suite. New types of food that only a compositor could make will be all the rage. Imagine an ornate edible chandelier constructed as fractals of deep-fried blooming onion, or Bézier-curved brownies loaded with explosive bursts of hot salted cara­mel and laced with fissures of frozen cream. The possibilities are quite literally endless.

Convenient? Certainly. Entertaining? For sure. But a printed meal could also help you stay healthy. For instance, your compositor could avoid ingredients to which you are allergic or intolerant. Prescription drugs and vitamins could be sold in cartridge form and mixed into your meals. If you need to cut your sodium intake, the machine could reduce the salt content of your food gradually over days and weeks, so that you never even notice.

Having a huge variety of tasty foods at your fingertips might seem like an invitation to overeat. On the other hand, losing weight ought to be easier when you don’t have to guess at a food’s calorie content and can have your compositor replace high-calorie fats and simple sugars with healthy proteins and complex carbohydrates. Here again, a compositor can help you make changes slowly so that your taste buds have time to adjust.

But is this food going to taste good? Early generations of the technology will probably do much better at replicating energy bars than strawberries. Food-printing technology today is where desktop printing was in the early 1980s, at the dot-matrix stage. But as recently as 20 years ago, people still argued that digital cameras would never replace film because they couldn’t match the resolution. So it’s conceivable that 20 to 30 years from now, we’ll be printing strawberries that taste as good as what we can buy today—and paying less for them.

Indeed, food compositors will not only revolutionize the home kitchen but could also radically alter the entire food production and distribution system. And let’s face it—change is sorely needed. Many of us have never eaten a truly tasty tomato. Selective breeding for color, shape, hardiness, ripening—every characteristic, it seems, except flavor—has optimized the tomato to withstand the demands of transcontinental shipping. The result is that the texture of the typical tomato is only slightly better than that of Styrofoam. And transportation of that nearly inedible fruit from the industrial farm to you consumes needless amounts of fuel, because what’s being shipped is mainly water.

As it wends its way through the agricultural supply chain, that tomato, like nearly every other food, is touched by many hands and surfaces. Each touch is a possible entry point for germs. The U.S. Centers for Disease Control and Prevention estimates that food-borne diseases cause approximately 76 million illnesses, 325 000 hospitalizations, and 5000 deaths in the United States each year. In Africa, food- and waterborne diseases claim 2000 lives every day.

Let’s not forget: Today’s system is inexcusably wasteful. On average, an American grocery store throws out 900 kilograms of expired food each week, enough to feed perhaps a thousand people. At least a third of the food grown or raised for human consumption worldwide never even gets eaten [see “Waste Not, Want Not,” in this issue]. And food waste and packaging represent the largest components of municipal solid waste going to landfills and incinerators.

Food compositors will virtually eliminate such inefficiencies. Fruits and vegetables will ripen in the field to peak flavor and nutritional content. Then they’ll be harvested, dehydrated, and packed into cartridges right where they’re grown. With shipping costs knocked down by perhaps a factor of 10 and produce no longer rejected because of cosmetic flaws, agriculture will become more profitable even as the cost of food comes down.

Even those who hate the idea of composited food should see the need for it in a world in which billions of people aspire to eat like those in developed countries. Everyone wants food that’s varied, tasty, healthy, safe, and affordable. Fulfilling that need is possible—not by producing and shipping ever more food as we currently do but by transforming the technology of food production to vastly improve its efficiency.

Maybe the future of food won’t play out in just this way. Inventors like us tend to think our ideas are inevitable, and we are almost always wrong. But even if we can’t predict specifically what will happen and when, the direction in which this technology is headed seems clear. The digital revolution changed the way we work, communicate, and entertain ourselves—why wouldn’t it also change the way we eat?

This article originally appeared in print as “Tasty Morxels.”